Id been pondering where I should fly to on my next random adventure and was pondering going out to Watts Bridge or the like, as I wanted to go somewhere that don’t normally visit. After posting on Facebook looking for anyone wanting to come for an adventure, and chatting with the local Pathfinder crew, I decided that id do a run to Sunshine Coast Airport, so that I could experience another Class D aerodrome. Archerfield has quite a few differences to most Class D aerodromes, with lots of implied clearances, and designated inbound and outbound points. Sunshine Coast is more of a true Class D allowing people to come in from any height, in any direction so it was to be a new experience. Likewise traffic can depart in any direction so an onwards clearance is required. Tania replied on Facebook that she was keen to come along, which was helpful being as she has her pilots certificate and a GFPT meaning she was familiar with what i was about to do.

The plan was to depart Archerfield around 9.15, fly out to Dayboro then head north east into Sunshine Coast, however Doug, a flight instructor friend who is based at sunshine coast, suggested that we track inbound to Sunny Coast from Moffat heads so we get a good coast view.

Sling 8592 was sitting on the tarmac ready when i got to the office early at 8.20, so after a preflight check, and showing Tania the plane, we set off. 28R was the active runway, so after getting clearance to go, we took off, climbed to 1000′ and headed north. We tracked out to the dam and then back inland to Dayboro. It was quite a bit hazy up there, which made identifying some features harder then normal. We hit Dayboro and then started heading north east to Colounda which is just south of the Moffat heads point that Doug suggested we use.  We maintained 2500′ most of the way to stay clear of the circuit height of the other small aerodromes out there (Caboolture and Redclliff).

Just after passing Coloundra i did a slow turn to the south to descend to 1500, as i wanted to report inbound at 1500 so that i had less height to have to lose once in the zone. I switched over ATIS early on, but really struggled to hear the report, without turning the volume up significantly, but between Tania and I we managed to work it out. Id been monitoring Sunny Coast tower frequency for about 10 minutes, so I already knew there was quite a bit going on, with helicopters and sea planes out as well as a plane preparing for a parachute drop.

At Moffat Head I made my inbound call.

I got the impression from his response that he wasn’t all that happy that I didn’t know sunshine coast, but i wanted to be clear that I didn’t know the area, so that if he had to revector me somewhere, that he could give detailed instructions and not expect me to know local land marks.

So we carried on heading to where i *thought* the field was.. It was quite hazy out there and I was struggling to find the field. I could see a big open area, which i started heading towards thinking thats where I wanted to be to join base. However after confering with the GPS infront of me, and on the iPad i realised it was more along the coast then i expected, which probably meant I had started to drift towards the upwind path of the run way. There was a quite a bit of traffic around at the time, which I believe prompted the tower to redirect me to join the right down wind, eg the left side of the field. He also took this time to find out what I wanted to do next and give me my onwards clearance.

So with that I started tracking more to the west so that i could end up on the left side of the field. I eventually spotted the Runway, and it was completely different to where i thought it was. In hindsight I should have spent some more time on google earth and google maps before hand taking a better look at what it looked like from the air.

With the runway in sight, and my departure instructions already received, all that was left was to actually do the touch and go. We got down wind, and I did a quick run over of the BUMFISH checks (Breaks, Undercarriage, Mixture, Fuel, Instruments, Switches and Harness) and then reported downwind.

I decided to extend downwind a bit longer than I normal would as there was a mountain involved, and I was a bit high, so I figured it would just be easier to have a longer final approach. A few minutes later, and we’d touched down on the runway, flaps up, full power, and we were off again! It was a nice view coming in to runway 18 with the ocean off to the right. Tania got some good photos of it. We made our right turn, climbed to 2500′ and departed to the west.

Midway across the zone the tower checked in just to confirm we were heading west at 2500′. I may have been tracking more 240 then 270 which may have prompted the call.

A minute later i was clear of the zone, however there was a guy reporting inbound at the same time, so it took another minute before I could get a word in on the radio.

And just like that, I’d survived my first away Class D aerodrome. I was quite happy with the result over all, as i didn’t violate any airspace, didn’t get yelled at by the tower, and didn’t mess up the landing at a foreign aerodrome

Looking at my watch, i realised we were a bit behind schedule, so I set the GPS for Dayboro and heading home. On the way back it seemed like we were going quite slow, and a quick look at the screen showed we had a 30knot head wind, so we were really only traveling around 60-70knots, so it took us just that bit longer to get there.

We started monitoring Archerfield Tower just after we got to Dayboro, and were quite surprised at how little traffic there was in the area. In the 10-15 minutes we were listening, no one made a single call, until we reported in at the TV towers, and then the red sling was at target and also on its way in. The ATIS and runway changed about a minute before i called in, so thankfully we checked that again, Runway 10L was to be runway and a few minutes later we were on final. It was a bit of a bumpy landing, 10knots or so of cross wind, and a bit of windsheer on final which required full power for a few seconds, meant I was a bit high, but having a massive runway like Archerfield meant getting down on it, really wasn’t going to be an issue.

Ive attached the audio at Sunshine Coast from LiveATC below. Ive cut out all the whitespace, so its 30 minutes of time, done in about 8 minutes : 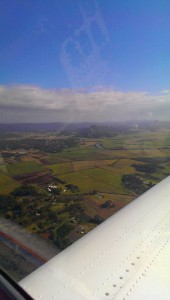 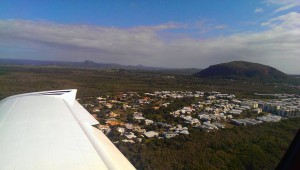