So after a false start a few weeks ago, where we were both pumped to go up and take photos, and then me being sick and delaying the flight in the interest of passenger safety we finally got the opportunity to actually make up the flight.

So bright and early on Saturday morning (after stopping by macca’s and getting coffee), I arrived at Archerfield to find Bonnii already sitting on the couch and likewise with coffee in hand. It was bloody cold outside but the sky was clear and the wind was non-existent. The nice shiny red sling 85xx was sitting on the tarmac and 8492 was being taxied over. A quick discussion with the man in charge confirmed i was taking 8492 out for the run. I left Bonnii to sit inside in the warm whilst I went out and pre-flighted the plane.

After doing my normal preflight routine and working clockwise round the plane, checking the usual bits and pieces, draining fuel and checking oil etc i was happy that everything was in top condition, and went and summoned my passenger. A quick brief inside about aircraft safety AKA stay away from the big spinny thing and outside we went.

Helping her up into her seat and buckling up the seat-belts, I went through a quick run down on everything in front of her (including the rudder pedals which she couldn’t reach) and off i went to get set up myself.

I started the bright shiny machine up, got the ATIS and ground Taxi clearance from Archer Ground, and we made our way over to 28R via the run ups including in which i gave a take off safety brief, to which i got the comment back of “My my you’ve actually grown up now and are all responsible and shit”

A stop and glance off the approach end of 28R, a check out to the final approach to 28R to see if there was any inbound traffic, and call to the Tower and off we went. Full throttle and up she goes, the sling takes off with so little effort that it really is amazing. A right turn off of 28R and we departed downwind to head out to Straddie.

15 minutes later, a frequency and transponder change later, we were out over clear water, scrub and bright sand. I realised i forgot to start the GPS track software so i quickly grabbed my phone and started that. We made our way around straddie keeping it on our right, so Bonnii could get photos without needing to lean over me, and i pointed out the small strip of Dunwich on our way round to point look out. On the coastal side on our way down to Q1, I did some steep turns over the sand mines so she could get some more in depth photos.

Tracking down to Q1 i dropped down to 1000ft to stay out of Gold Coasts airspace, and we flew coastal over SeaWorld and down to Q1. Hitting Q1 we circled around it getting some good pics, and started the return leg to Archerfield. We came inland for a bit, and went over Movie World and Dreamworld, before heading to the mouth of the Logan river to fly the river leg home. As we were flying over heckfield there was a plane taxiing for departure and another one lining up, so i started monitoring heckfield freq and was greeted by the two pilots having quite a yak. Once they shut up long enough for me to get a word in, I made a quick announcement letting them know i was overhead and my intentions and then continued heading north while keeping an eye out for the departing planes.

Hitting the mouth of the Logan river I flew the river bends home. It was how i was taught to keep the balance ball level centred so i very much enjoy the turns and bends in the river as they provide good hand-eye co-ordination practice. Once out of the bends we followed the Pacific motorway up to target, conveniently pointing out that the target building has a massive target symbol on top, which is why it makes a good inbound point and we were almost there.

On the inbound call to Archerfield the tower told me to join final 28L and also let me know that there was some else behind me, but didn’t know their intentions yet. Midway between target and the field, the other plane called inbound as well. The tower advised them to join final for 28L as well, and then proceeded to call me and tell me to change to 28R and that the other plane was going to overtake me on the left very soon. Sure enough it speed past on its way, and we were both surprised to see it was a Yak moving at a nice pace.

A nice and smoothish touchdown later, exiting the active runway on the second exit, and we were back! I opened the roof and we headed back to the terminal. While I unloaded the plane, Bonnii wondered around and took some more photos of the aircraft near us. We went inside, did the paperwork and that was that! Bonnii had successfully survived a trip with me, not died, and not wanted to kill me by the time we got back. Mission successful! 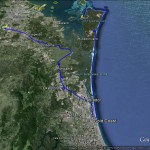 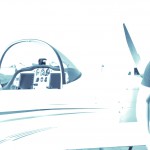 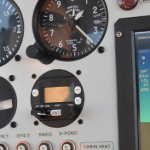