Bright and early Sunday morning, I made my way down to the flight school at 5am for my CTA briefing with mike. Despite having finished my RPL, I’m still keen to learn more, and as part of the PPL license, Controlled Airspace is one of the criteria that you need to be able to work with. My only experience with CTA prior was during my RPL test where we made a stop at Gold Coast, but as I only planned to fly from Archerfield to Gold Coast at 1500’ for that flight, Brisbane Centre had no clearance to give me, until we got in range of the tower, so it was only a very small taste of what was to come.

The original CTA nav path was expected to be Archerfield -> GoldCoast -> Toowoomba -> Archerfield. The reason behind this was we wanted to go through the military CTA at amberley. So i had done up maps, and expected frequencies and my paper log in prep for this flight plan.

So at 5am, I was sitting in the PathFinder office with my McDonalds coffee looking like death warmed up but ready to learn more. On early discussion with Mike around what we were going to do for the day, we discovered that amberly was not going to be active on sunday so there would be no benefit in flying out to Toowoomba. Instead we re-routed to go Archerfield -> Gold Coast -> RedClife -> Archerfield, which would keep me under Brisbane Centres control for longer.

We spent some time going through the different roles and responsibilities of the different CTA controllers (Approach/Departure, Centre, Tower, Clearance Delivery), and what information they want to know in order to do their job, and how if you know what they need to do, you can make their life easier and therefor make your life easier when it comes to working with them.  The below photo that I took from the lesson goes over the different controllers in a bit more detail. We touched a little bit on the radio calls, but the plan was to not rehearse different calls as they should be a bit more dynamic, and theres no “one size fits all”. 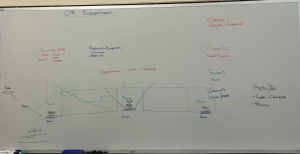 After the brief, there was a flight or two scheduled before our flight, so I went with Jimmy who was taking his sister-in-law up, and grabbed both planes from the parking bays and taxied them over to the front of the terminal building. Starting a big arsed fan in front of you, with the roof open in the Sling, at 5.45 in the morning, is definitely a cold activity. I couldn’t feel my nose or face by the time we got back to the line, and was happy to get back inside.

7am came around quickly, and with the earlier flights back, we were ready to go. I was a tad unorganised at this point, so by the time i got to the plane, with my headset and our new plan, Mike had already done half the start up list, and as soon as i sat in the plane, he started it up, finished the startup list, and started taxiing to run-ups while i was plugging in, and getting settled. We go the run ups completed, and then it was time to make the first of my CTA radio calls for the day. I needed a transponder code from Brisbane Centre so that they could identify me when we got off the ground at Archerfield.

And with that, we had our code, and were ready to depart archerfield. 28R was the duty runway, and after grabbing the ATIS, getting ground taxi clearance, and heading to holding point, we were ready to go with a southern departure planned. Tower gave us clearance and away we went. We departed to the south as planned, and once clear of the archerfield zone, made another called to BNE CTR with our position and our planned alttitude

I was going to continue to do a play by play review of the flight as a whole, but I’ve decided that there isn’t much value in that, instead i’ll summaries the rest of the flight and then go into what I learnt and what I need to review.

We continued to the Gold Coast finally being granted clearance about 30 miles out and climbed into the controlled aerospace, and continued off to gold coast. There was a a380 on final that took us a long time to spot amongst the clouds and the rivers but we found it and followed it in. As I had fumbled a few radio calls, Gold Coast Tower was a bit weary of us, especially with the a380 on final, so they made sure we were following it a few times.

We went over to the GA parking, and Mike gave me a quick review. In short, I was rushing to respond to the radio calls rather than thinking them through (Remember, Aviate, Navigate Communicate!), was replying with information that doesn’t need to be repeated, and mumbling a bit. We also went through the best way to get taxi and airways clearance when on the ground. The recommendation from Mike was to ask for them separately, as asking them together ends up in a very very long radio call to write down and repeat back.  For example if i had asked for them both at the same time, the response from GC Ground would have been along the lines of “Sling 8592, Gold Coast Ground, squack 3737, cleared to Brisbane then on to Redcliffe, fly runway heading, climb to 6000. Taxi Golf cross runway 23, left foxtrot to holding point Foxtrot runway 10”. Which is a lot to write down quickly and respond with. Breaking it up, allowed it to be in come in in more manageable chunks.

With both ground and airways sorted, we took off and started the journey to Redcliffe.. Unfortunately along the way Brisbane Centre revoked our clearance due to traffic at Brisbane and wouldn’t let us fly over Brisbane, and instead wanted us to take the uncontrolled path either out via Stradbroke or back via Archerfield to get to Redcliffe. Mike spoke to them for a bit and advised that we were trying to do CTA work so wanted to stay in. They relented a bit, and let us stay CTA whilst heading back towards Archerfield, with the requirement we had to be out before we crossed the Brisbane 19 centre line. With that in mind, and my request to mike earlier that i wanted to do some practise stalls at slow speed in turns, we decided to exit early and dropped down to training area, did some turns, and then headed back to Archerfield via Park Ridge.

The rest of the trip was relatively uneventful, except for being pinged a few times about my height. It seems i definitely need to practise my straight and level flying again, but since I’m heading to Coffs Harbour for a nav in a few weeks, i’ll have ample opportunity.

So the things I learnt:

Linked below is our two hour flight, squished into 15 minutes of Video