For the last 18 months or so, since I’ve had my Cross Country endorsement, I’ve been trying to convince Daniel that we should do a long distance run somewhere, and make a full day of it. After much poking and proding, Daniel finally agreed to do a run down to Coffs Harbour with me on Friday.http://rtisnab.ru

Coffs Harbour has been high on my to go to list for two reasons. One, its another Class D aerodrome for me to experience; and Two, because it is right on the beach. 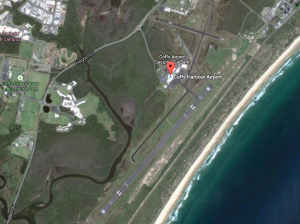 I started preparing a week before the trip, updating all my maps as they had hit their expiry period, and planing out the route down. I was a bit nervous because at the 1 week out point, the weather forecast for Friday was for rain and fog, which was a bit off putting.

We wanted a good coastal view, so I came up with a plan that saw us heading coastal down, leaving Archerfield, heading out to Tyagarah (and flying around the Lighthouse at Byron), onwards to Ballina, and than the last stretch to Coffs Harbour. Coming home, I chose an inland route, leaving Coffs heading to Grafton, Casino, and then into Archerfield via Park Ridge.

On Thursday before the trip the weather forecast still wasn’t good, and you know that there is the potential for issues when you get a text from the Flight School asking “How much fuel do you want on your trip to the Weather”. The forecast was predicting early morning fog, clouds at 3500′ and the potential for some light rain.

Friday morning came around, and I grabbed the latest version of the weather, and updated my flight log. OzRunways has a option to view some live cameras that are all over Australia, so I pulled up the ones for Gold Coast and Ballina, and was presently surprised to see no clouds and blue skies everywhere.

I got down to PathFinder Aviation about an hour before my flight, and finalized my flight note (with info on who to call and where we were going in case we didn’t return), and put fuel in the plane. We couldn’t fill the tanks entirely as we would be over weight (RA-Aus planes have a max take off weight of 600kg), so we could only fill up to 100L, but in the Sling, with a burn rate of 15L/hr, that gave us plenty of fuel for our 4 hour flight, with a large volume in reserve in case we had to divert.

As an aside, I may have scared the parents of a young boy at the flight school coming in for his trial flight, as I made a joke to one of the flight instructors, that our flight note wouldn’t be required because if we were going down, Id make sure we go down in a flaming ball of glory and that our location would be easy to find as we would be all over the news.. Their heads turned around to face us so quickly that they might just have gotten whip lash, and we both quickly re-assured them that it was simply some humour. Oops.

Around this time, Daniel showed up, so we loaded up the plane, both jumped in and prepared to go! 28 Left was the active runway for our southern departure, so after doing our run ups, making sure the camera was set and ready, we taxied over to 28L and after getting take off clearance, we were finally off on our adventure. We climbed out, and made our left hand turn and headed down towards the coast. Tyagarah airfield was the first nav point, as its close to the light house at Byron, and if we tracked directly to there from Beaudesert (the southern departure point), we would miss Gold Coast Airspace and the restricted areas.

As we got near Tyagarah, it was apparent that it was a busy day out there. When we were 15 miles out we heard that there was one plane going southbound at 1500, a piper inbound at 3500  from the south planning to decent to 1500 and fly around the light house, an auto-glider taking off on some adventures, the parachute caravan taxing for operations, a jabiru 15 miles behind us heading to Casino and a few helicopters. So we were keeping an eye out for all sorts of traffic. By the time we got to the field, most of the aircraft were gone, the caravan was back on the ground from the jump, the helicopter had headed over to the Gold Coast. We wanted a good view of the lighthouse, so we dropped down to 1000′ and started towards it.

After broadcasting our intentions, the piper heading northbound to the light house was passing 2500 for 1500′ so we said we’d drop down to 750, to keep well clear. We flew around the light house and Daniel got some pretty awesome shots of Cape Byron and the light house. The most eastern point of Australia definitely does itself proud with an amazing view and great scenery. 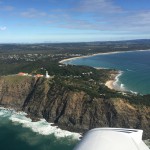 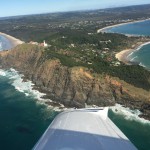 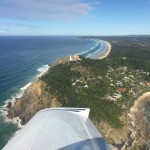