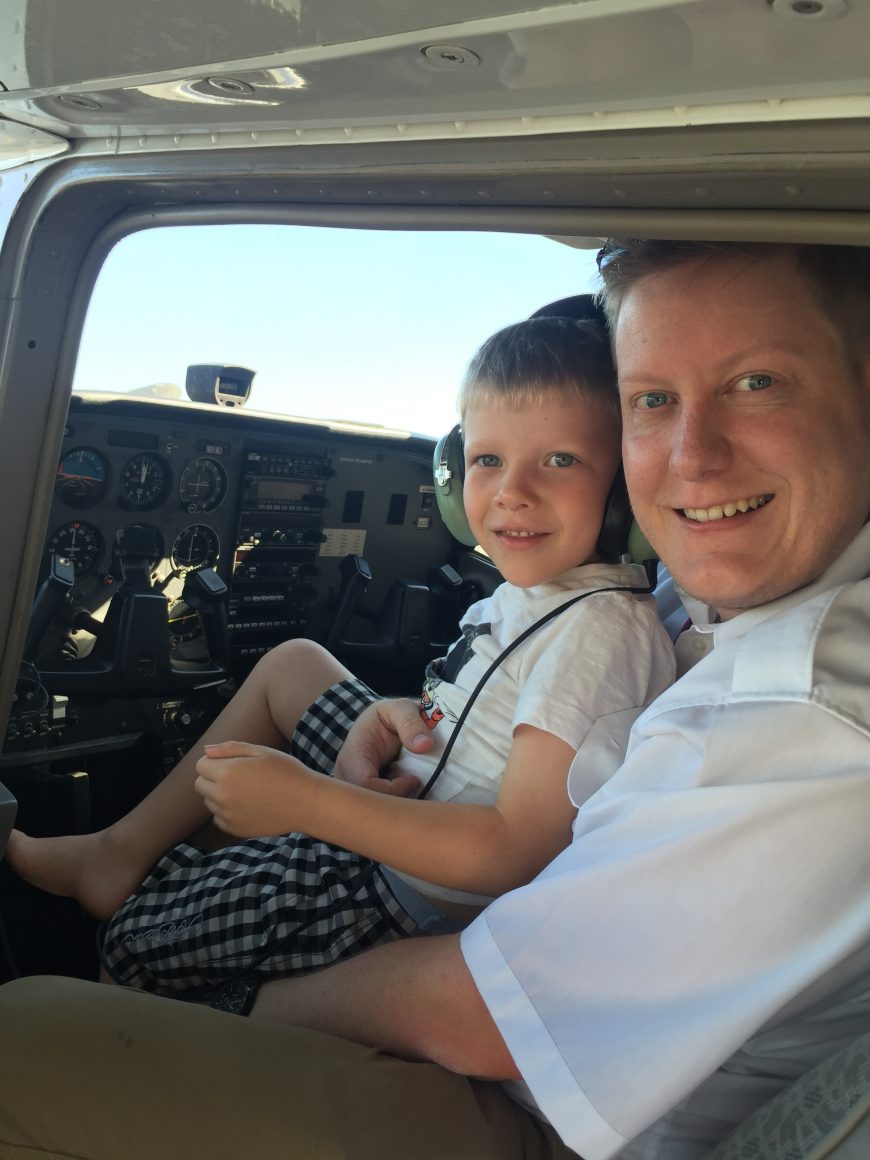 A few months ago, over a regular Sunday dinner at a friends place, my 5yr old godson (hereby referred to as Munchkin), looked over at his mum anxiously and whispered something to her to which she replied “You can ask him”. He then looked over me, and after a few false starts and a look of trepidation, asked me if I would take him up flying! I, of course, said I would love too! And so over the next few weeks I started working out what I would need to do to take a child up in a plane.

After some googling, and reading and re-reading CAAP 235-2(2) I think I now know most things about the child car seat standard ANZ 1754 and how it applies in planes. A really fun read I promise :/ Long story short, I needed a booster seat that could be used in the aeroplane without a rear tie-down, or alternatively a plane that had a rear anchor point for the car seat. Fortunately after checking the cars and what he already had, we found one of this car seats already matched the requirements.

Additionally i needed to find a headset that was suitable for a 5 year old, but thankfully after having a chat with the guys at PathFinder Aviation they had one that I could borrow for the flight, which made things easier.

We decided that because Munchkin was only 5, Daniel should come up with him, just in case he didn’t like it so that he had someone with him that could re-assure him and look after him while I take care of flying the plane. This meant that my normal ride of the Sling was out of the question, so it was back to the Cessna 172.

I hadn’t flown the 172 for a few months, so I arranged with PathFinder to have an instructor come along for a ride just to make sure I wasn’t going to pancake the plane into the ground. Marcello drew the short straw, and came for a ride. I must admit, it was pretty bad. I just couldn’t get a groove going or get anything right. Couple that with getting 3 runway changes (28L to 22R to 04L) in under 45 minutes, meant that I struggled to get my aim points right, and on the last 3 circuits after being moved to 04L we were advised we had a 5 knot tail wind, so that really didn’t help either. But the landings were all survivable, there was no bounces more just sloppy handling getting down. In the debrief, Marcello said that he still had no qualms with me flying the 172 and just to better manage my speeds and my RPM’s to help get everything right.

So with that in mind, I booked ZWY for two weeks later to finally take Munchkin for a ride. Being in the 172 also meant I had to take a bit more care with managing fuel and weight and balance, so I made sure during the week that I did the proper calculations and made sure I had things worked out right to take Munchkin and Daniel, and ideally enough fuel to take another friend and her daughter up afterwards.

The day before, I called up FlightOne to confirm the booking and was advised that ZWY had gone away for maintenance and I would be taking up VH-VVO, a C172R. I always get a bit nervous with new planes that I haven’t been in before, but after a quick chat with the guys at FlightOne the morning of the flight I felt better about it, and once I was in the plane everything felt like normal again.

We pulled the plane out of the hanger, and after doing the preflight checks, making sure I had fuel, and getting myself and all my equipment all settled in, I taxied the plane round to the Terminal Building to wait for the precious cargo to arrive.

When Munchkin arrived, he was just completely full of smiles, before we had even made it out to the plane he had this massive grin plastered all over his face. I don’t think I’ve seen a child so happy before! We got his booster seat set up in the plane, and loaded him in. This photo was taken only a minute or two after he had gotten into the plane, and put his headset on! 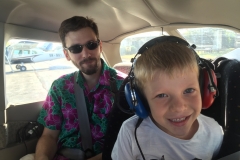 It was also Daniels first time in the 172, so I gave him a bit of a brief as to where everything is in the C172, including how the seat moves, in case there was any cause for him to need to get himself and Munchkin out of the plane in a hurry. With everyone strapped in, we got the ATIS, our ground clearance, and taxied over to 28R via the Run Up bays to do our ground checks.

We were instructed to hold short of 28R due to landing traffic, so Daniel and Munchkin watched the preceding planes land. A few moments later we were cleared to line up, and shortly after that given our take off clearance. Full throttle, feet to the floor, and 55 knots later and we were airborne! Just after we got off the ground Daniel said to Munchkin “We’re in the air now..” to which he was promptly put in his place with a “I can see that daddy!”

We continued our climb, flaps up at 500″, gentle right hand turn in the circuit and we finished climbing up to 1000″ for our Eastern departure. All along the way Munchkin was making comments about the things he could see, including how big (or how small) the boats and cars below us were.

Off to the training area we headed so that I could do some maneuvers to see how excited I could make this happy 5 yr old. I did some gentle clearing turns over the area and ran through the HASELL checks and then after checking he was all good, we launched into a steep 45 left turn so that he could see directly out the window below him. Much fun was had, as he was looking out the window and seeing land and river directly below us. During this turn we received the amazing comment of “Daddy, I don’t think this plane can do a back flip”. Not this time Munchkin, but one day I’ll have my Aerobatics rating and we absolutely will!

We then launched into a steep right hand turn, to which I got the comment of “It looks like the wings are going to touch the ground”, laughter was had and an assurance that we weren’t near the ground and that if the wings touched, Uncle Nat was doing a very very bad job.

Munchkin wanted to see the beach and the boats, so we made a bee-line over to Straddie Island so that he could see the beach in person, and the boats down below. On the way I introduced Daniel to one of the added benefits of the C172, the ADF (Automatic Direction Finder), and more importantly its ability to pick up AM radio. He’s always complaining in flight that we need some music, so a quick change later from Archerfield’s 419 NDB over to 693 4KQ, and we were all bopping in the plane to some old-school music.

We went low so that he could see the beach to which he took many photos of on his dads iPhone, and then VVO and its precious cargo started the return trip home. On the way we flew the usual river course home to practise my stick and rudder skills, and to get some final steep turns in on the way.

Called in at Target, after struggling to get the ATIS because Munchkin talked over the QNH and the ATIS code, so I had to listen to it all over again (after pushing the nicely placed button labelled PILOT on the intercom to isolate me from them), an instruction to join a long final for 28R and by then we weren’t far from home.

Over the intercom I quietly heard the comment of “Daddy, does Uncle Nat know how to land?”, and after assuring him we could, and telling him that if he gave me a super awesome high five, I thought Id be able to land the plane. One High-Five later and we were on a long final for 28R.

After watching the shadow get bigger and bigger and bigger, and a small non-existent bump later, we were on the ground, off the runway, and taxiing back to the Terminal Building. We took a few more photos and let him play with the Yoke for a bit, pretending to fly the plane all around a bit, and then I started prepping the plane for the next flight while Daniel and Munchkin had one final look around the plane.

Munchkin had an absolute blast during the flight, as can be seen by the massive smiles in all the photos. I don’t think I’ve ever seen the look of pure joy on a child’s face before like what he had all through his flight. Definitely makes it all worth while. I cant wait until he is old enough to come up in one of the more nimble planes on his own and we can have more fun!